The Dallas Mavericks will host the Phoenix Suns for Game 3 of the Western Conference Semifinals from the American Airlines Center this Friday night on ESPN. The Suns took Game 2 in blowout fashion after holding off a late rally from the Mavs in the series opener.

Dallas is 6-4 straight up over their last ten games. The Mavs defeated the Utah Jazz in six games despite missing all-star guard Luka Doncic for the first three contests, but they struggled against Phoenix thus far. Dallas has covered the spread in seven of their last ten games, and they rewarded loyal Mavs bettors with a pair of underdog victories over Utah. Dallas was third in the NBA against the spread this season, posting an impressive 52-34-2.

Phoenix is 8-2 straight up over their last ten games. The Suns avoided disaster by eliminating a feisty New Orleans Pelicans team in six games, and they’ve come out sharp here against the Mavs, with their eyes set on a return to the NBA Finals. The Suns have covered in both wins, and they posted a 48-40 record against the spread this season.

Phoenix has dominated the head to head series over the past three seasons, with the Suns winning the last eleven meetings, and covering in all five matchups this season.

Why Phoenix can cover

Phoenix has been the best team in the NBA for the last two seasons, and their recent dominance of the Luka-led Mavs has been on full display through two contests. The Suns pulled away despite trailing at halftime, outsourcing the Mavs 71-49 in the second half of Game 2.

Monty WIlliams picked up his second NBA Coach of the Year Award after leading the Suns to a franchise record 64 wins, winning the crowded Pacific Division handily. The Suns score 114.6 points, while shooting a league-best 48.5%, and allowing 107.5 points per game.

Chris Paul continues to add to his playoff legend. After fittingly ending the Pelicans season in New Orleans with a 14-14 shooting performance, the Point God hasn’t slowed down here, scoring 28 points in the Game 2 win. His assists numbers are down due to what time of year it is, and with Paul’s over sitting at 17.5 (-127) for this one, that may be the best bet for the future Hall of Famer.

Devin Booker appears to be back in stride after delivering a 30-point performance in the Game 2 victory. DBook’s versatility has been on display this postseason, making all of his props appealing. With his points number creeping back up, Booker’s assists prop at 4.5 (+125) looks appealing on the road. He recorded 8 in Game 1 before just missing the number last time out with 4, and in what should be a much-more contested game, he could find himself facilitating just a bit more.

Why Dallas can cover

Dallas has thrived as an underdog this season, and while it was on full display last round against Utah, they haven’t found the same success here against Phoenix. The Mavs fought hard in the first half of Game 2, but they were blown away in the second half. If there’s a game for them to win, it’d be this one. The energy in the American Airlines Center will go a long way this evening, and the Mavs will avoid a win-or-go-home Game 4 with a strong effort here.

Jason Kidd had a strong first season at the helm in Dallas, posting a 52-30 record, earning his first 50-win season as a coach. The Mavs score 107.8 points per game, while allowing a league-best 104.3 points per game.

Luka Doncic has yet to defeat the Suns during his four-year career, but he’s given them all they can handle through two games so far. After torching the Suns for 45 in Game 1, Doncic got off to another hot start scoring 24 points in the first half, before finishing with 35. Luka has been on a roll, and with his point total sitting at a steep 34.5 (-105), his rebounding prop may be the way to go this evening, as it currently sits at 9.5 (-110).

Jalen Brunson’s efforts haven’t been forgotten, but they need a lot more from the former Villanova guard. After a 3-12 shooting performance, look for Brunson to shake back a bit here. Same for third-and-D marksmen Dorian Finney-Smith and Reggie Bullock, with the latter breaking a cold streak and hitting four threes last time out. Bullock’s and Finney-Smith’s three-point makes are set at over 2.5, with DFS carrying a bit more value at (+135) for this one, and they both feel like safe bets. 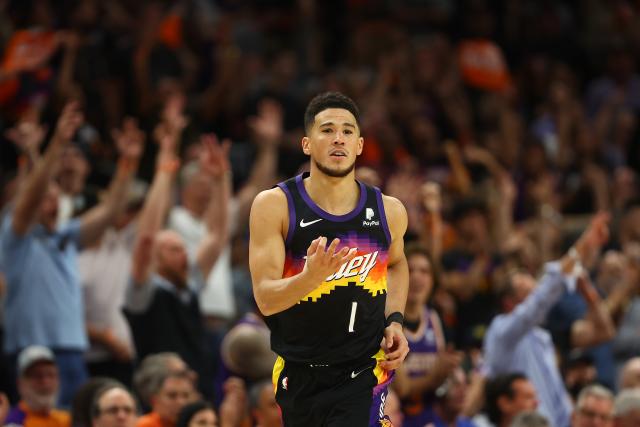