We're looking to string together back-to-back nights of winners with the Three at 3, so keep reading for our favorite NBA plays for tonight's five-game slate:

The Raptors are 18-9 against the spread when playing against teams with winning records this season, and they're also 14-4 against the spread when facing teams that shoot at least 36.0% from behind the three-point line on the year. That's not bad considering they have also won and covered in five straight. Meanwhile, the Hornets come into this game after having lost four in a row and six of their last eight. This team is not playing very well at the moment, and this matchup is a really tough one for James Borrego's group. While LaMelo Ball is one of the best young point guards in the league, it's going to be tough for him to win his matchup with Fred VanVleet. VanVleet just made his first All-Star team and is one of the better two-way guards in basketball. Meanwhile, Scottie Barnes, OG Anunoby and Pascal Siakam make up one of the best wing trios in the entire league. Toronto is also playing some insane defense at the moment, as the team is fifth in the league in defensive rating over the course of its five-game winning streak.

The Bulls are coming off of a tough loss to the Philadelphia 76ers yesterday, and they now have to play the second night of a back-to-back against arguably the best team in basketball. DeMar DeRozan is likely going to be completely spent after his 45-point effort yesterday, yet he'll now have to go against Mikal Bridges tonight. Bridges is one of the best defenders in the entire league, and he has the length to contest everything DeRozan puts up. Deandre Ayton could also similarly give Nikola Vucevic trouble, as he has the size, length and speed to do a nice job on him defensively. And on the other end of the floor, Devin Booker and Chris Paul could absolutely cook a Bulls backcourt that is without Lonzo Ball and Alex Caruso. Those are two of the best defenders in the league on the perimeter, so Phoenix's explosive backcourt will make Chicago miss its guard duo even more. Also, the Suns are 18-6 against the spread when playing on the road against teams with winning percentages between 60.0% and 70.0% over the last three seasons.

The Knicks are coming off of a brutal collapse against the Los Angeles Lakers on Saturday, as New York had a 21-point lead in that game and then couldn't even cover the 6.5-point spread. It was, however, a game in which the Knicks looked a lot better offensively, and they should be able to carry that over into this meeting with the Jazz. New York was 30-11 against the spread in the second half of the season last year, and better days are likely ahead for this year's team, too. The Knicks are also 51-34 against the spread when coming off a game that went Over the total over the last three seasons. Now, they'll face a Jazz team that will be without Rudy Gobert tonight. Gobert's rim protection would have been huge against a Knicks team that features guys like RJ Barrett, Julius Randle and Mitchell Robinson. Overall, Donovan Mitchell likely will go off on the offensive end in this game, but New York is capable of not being blown out here. 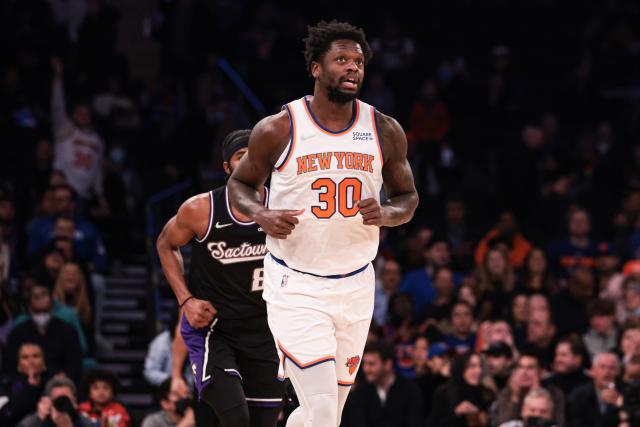