The Dallas Mavericks and the Phoenix Suns will open the Western Conference Semifinals this Monday night on TNT. Both squads avoided win-or-go-home situations by picking up road victories in Game 6 to advance over Utah and New Orleans, respectively. The Suns come into this one as five-point favorites.

Dallas is 8-2 straight up over their last ten games. The Mavs closed the regular season out with four straight wins, before defeating the Utah Jazz in six games despite missing all-star guard Luka Doncic for the first three contests. Dallas has covered the spread in nine of their last ten games, and they rewarded loyal Mavs bettors with a pair of underdog victories over Utah. Dallas was third in the NBA against the spread this season, posting an impressive 52-34-2.

Phoenix is 6-4 straight up over their last ten games. The Suns avoided disaster by eliminating a feisty New Orleans Pelicans team in six games, despite losing Devin Booker for three games. The Suns covered in all four wins, and they posted a 48-40 record against the spread this season.

Phoenix has dominated the head to head series over the past three seasons, with the Suns winning the last nine meetings, and covering in all three matchups this season.

Why Dallas can cover

Dallas has thrived as an underdog this season, and it was on full display last round against Utah. The Mavs were written off after ruling Luka Doncic out for their first two home games, and their resilience now has them in a spot to give Phoenix a run for their money. Luka Doncic has yet to beat the Suns in his career, and there’s a good chance that changes over the next two weeks

Jason Kidd had a strong first season at the helm in Dallas, posting a 52-30 record, earning his first 50-win season as a coach. The Mavs score 107.8 points per game, while allowing a league-best 104.3 points per game.

Luka Doncic’s return to the lineup was timely, and his Game 5 performance was terrific. The 6’7 guard scored 33 points, crossing the 30-point plateau for the seventh time in his last ten games. Doncic’s over 30.5 (-118) could be an interesting bet, as the Suns represent one of the stiffer units in the league.

Jalen Brunson’s efforts can not be forgotten heading into this series. The former Villanova guard delivered with the best stretch of his four-year NBA career, scoring no less than 23 points in all six games, including a career-high 41 points in the Game 2 win.

Dorian Finney-Smith and Reggie Bullock have been reliable for three-point bettors this season, and both of them hit three or more in five of the six games versus Utah. Bullock’s and Finney-Smith’s three-point makes are set at over 2.5, with the latter carrying a bit more value at (+115) for this one, and they both feel like safe bets.

Why Phoenix can cover

Phoenix has been the best team in the NBA for the last two seasons, and they’ve been dealt a very manageable number at home here. The Suns have also dominated the Mavs over the past three seasons, winning a notable nine straight games.

Monty Williams picked up his second NBA Coach of the Year Award after leading the Suns to a franchise record 64 wins, winning the crowded Pacific Division handily. The Suns score 114.6 points, while shooting a league-best 48.5%, and allowing 107.5 points per game.

Chris Paul literally turned back the clock with a pair of vintage performances in New Orleans, with his Game 6 performance going down as one of the best in league history. The Point God scored 33 points on an immaculate 14-14 shooting, and the mid-range clinic may just continue here. Paul’s over sits at 16.5 (-121), which is attainable, but dependent on how much heavy lifting he has to do.

Devin Booker’s health and status coming into this one will be worth watching. The former UK stud looked rusty in the series-clinching Game 6 win, but according to sources, the hammy “looks good”. This update makes Booker’s over, which currently rests at 23.5 (-143), kind of appealing, considering he cleared that number in eight of his previous nine games. 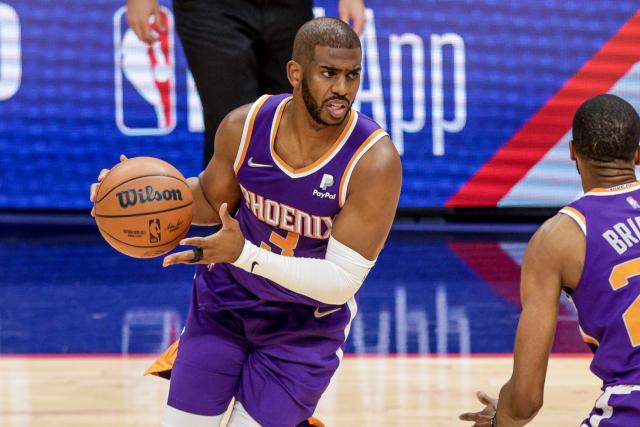